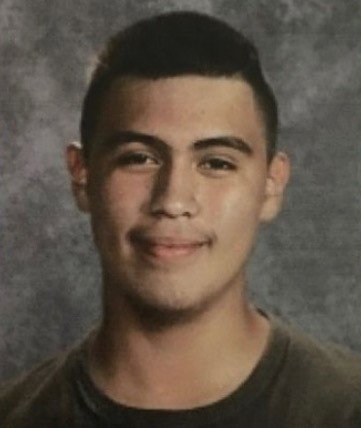 Luis Daniel Patino Ortega would be celebrating his 15th birthday on November 17th. Even though it is customary in the Hispanic-Latino custom for only girls to celebrate their "Quinceañera," he definitely wanted to celebrate his "15" by renting a limo and riding around town with his friends and cousins. He was saving up for it. The evening of September 11 made that dream impossible when he was killed in a hit and run as he rode his mini motorbike back home after having run his usual errand for the family. Luis Daniel was a little different. The greatest difference was seen in his social skills. He was more of a loner and shied away from others, especially larger groups. He was more on the quiet side, but he would often surprise everyone with a joke, an anecdote or a show of affection. At the end of his middle school years it was decided that he would be tested; he was diagnosed with autism.

He was known in school and with his friends as Luis. At school in the Washington Township district he was very well liked, by both his classmates and his teachers. At home and to his very large extended family he was known as Daniel. But he was known to all who knew him as an amazing, respectful, kind, and compassionate young man, who walked around with a smile on his face. He was very wise, and he was very intentional about doing things. He wanted to emulate his father, who worked in construction, by being a Construction Project Manager. His abilities and skills were amazing. He was meticulous about doing certain things. He would love to carry copies of his dad's finished project blueprints on his back in his backpack, walking around as if he were ready to begin a project at any moment.

As a gift, he asked his parents for a power washer. As soon as he received it, he took care of washing the family vehicle. He would make himself responsible for cleaning the windows of their home, meticulously caring for the flower gardens and caring for the lawn. He took pride in the work he did, and as he got older, he insisted on taking on more responsibilities at home.

The family fondly remembers his love for basketball. He knew the sport, and admired the basketball players. He loved his brothers and sister, and they loved him. He was protective in his own way. He never held grudges and he yielded to their preferences and requests. Luis Daniel was never one to feel sorry for himself. His mom and dad each had a special bond and relationship with him. Each would take him to their place of work. When they wanted to pay him, he would not want to receive any money. He would say he wanted to be an engineer so that he could make enough money to take care of his mother and father, either by building cars or building homes. Either way, he just loved to build, and he knew so much about each.

There were two neighbors with whom he had a very special relationship and for which his parents are very grateful. His little friend, whom he took under his wing, helping him get on the bus in the mornings, was a responsibility he enjoyed. His visits and conversations with his "older friend" across the street brought him a sense of pride and joy. Whenever his mom would tell him that he needed to make more friends, he would respond to her, "I already have a bunch of friends. They just don't know it yet." Innocent and simple statements like that are what the family remembers. Memories of his dry humor and quick wit have been putting some much-needed smiles on their faces and have even given way to laughter amongst his family and friends.

Luis Daniel is survived by his parents, Jose Luis Patino and Maria Guadalupe Ortega; three younger siblings, Fernando (age 12), Vanessa (age 10) and Sebastian (age 9); paternal and maternal grandparents Jesus Patino and Isabel Arroyo and Jose Tarcicio Ortega and Maria de la Luz Nunez, respectively; and many cousins, aunts and uncles, some of whom live locally and others who live out of town, in other states and out of the country. One day he asked his parents what he had to do to be famous. In the eyes of all who knew him he WAS famous . . . because the way he lived his life, it impacted mightily in a positive way on everyone he knew. Luis Daniel Patino Ortega . . . a beautiful life well lived, that ended way too soon.

Share Your Memory of
Luis
Upload Your Memory View All Memories
Be the first to upload a memory!