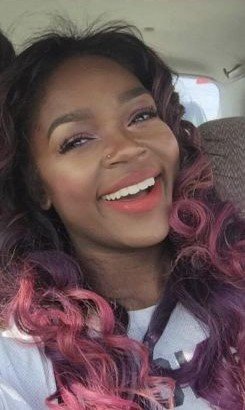 Immanuela Faith Irving, was born January 23, 1996 in Montego Bay, of Jamaican parentage.  She then migrated to the United States with her mother Hillary at the tender age of ten months old.   Faith as she is affectionately called, attended The Bethesda Temple Apostolic Church in Indianapolis where her mother became a member in 1997.  Her early childhood education began at the Bethesda Temple Daycare and later she went to St. Joan of Arc Catholic School and Guion Creek Elementary where she received her primary school education.  She went to junior high at Guion Creek Middle School and completed her secondary education at Pike High School. Faith was an avid reader, with an engaged and scientific mind and she loved the library.  When she spent time with her paternal  grandmother in New York, ‘M’ Polly’, as she called her,  or with her Aunt Claudette in Connecticut, she went to the library.  If she was on a family vacation whether in Miami or Negril Jamaica, she knew where the libraries were.  For a while,  she toyed with the idea of becoming a librarian because of her love for books,  but instead followed her passion for the sciences.   Her mother recounted numerous occasions where she would find a bird’s nest under Faith’s bed or a time when she had a recycling plant in her bathroom.  Shift-made bunsen burners were everywhere in the house, with Faith seemingly unaware of the dangers of fire.  She was always experimenting with some matter or the other.  It  came as no surprise when she majored in Chemistry at IUPUI, Indianapolis Campus and hoped to someday become a pharmacist to provide healing remedies for others. A very soft-spoken and well- mannered young lady who would  often be seen, but not heard.  She was  congenial and found a way to get along with everyone wherever she went.  She made friends from all walks of life.  With wisdom beyond her years,  Faith made decisions which were sound, and influenced others to do so.  Her friends describe her as someone who has a listening ear, and she touched the lives of many with her art of using simple but wise words. Her quest for knowledge and understanding took her down the Road Less Travelled.  She  rarely turned down a challenge to explore new options and was fearless.  So fearless that she once said if she were to die young, she would not be afraid.   Her friends called her free-spirited and wherever she went, she brought a radiant smile, one which would light up a room as soon as she entered.  She had a laughter which would echo with infectious delight.  There was no sadness when Faith was around. Because of her very vibrant and outgoing nature, Faith had made so many friends, who join her family in celebrating her life here today.   Our beautiful daughter, granddaughter, sister, niece, cousin and friend left us unexpectedly in the twinkling of an eye.   As the scripture says ….we shall be caught up in the wink of an eye.  Immanuela Faith is gone home to be with the Lord. Though she is sadly missed, we know she has been caught up to be with the Lord.  Immanuela  leaves in memory her mother Z. Hillary, father Richard, Sisters, Tendika, Jaime and Khalea, grandmother Pauline, hosts of uncles, aunts, cousins and friends.

Share Your Memory of
Immanuela
Upload Your Memory View All Memories
Be the first to upload a memory!