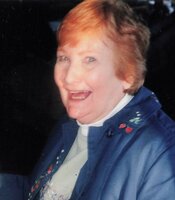 Virginia Dee (Gibson) Schloot, 94, was born on March 11, 1928 in Louisville Kentucky to William Gibson and Frances (Haven) Gibson, the first of two children. She passed away March 30, 2022 peacefully from extended illnesses. After the flood of 1937, the family relocated and started over to another section of Louisville. In 1940 her family moved to Indianapolis, Indiana where she lived the majority of her remaining years. Virginia, known as Ginny, remembers living above the Victory Cafeteria, where her parents worked. It was across from the Kentucky Derby race track. The Kentucky Derby was always an important event in her life, as well as the Indy 500. In her younger years, she was a member of the Baptist Church and sang in the choir. After she married, she was a member of a Methodist Church and later Church of Christ. Ginny graduated from Shortridge High School in Indianapolis, and then obtained a dental certificate and spent 28 years working in the dentistry field as an Orthodontist Assistant and was also a homemaker. Her infectious smile and red hair may have been two qualities that attracted her to Jim Schloot and they married in January 1950. They later divorced. Ginny is survived by her three children, Sandra Hardy-Hagen (Dean) of Owatonna, MN; Roland Reed Schloot of Fortville, IN; and Jamie Benefiel (David) of Morristown, IN; 10 grandchildren, 13 great-grandchildren and one niece, Valerie Gibson of Austin, TX, all whom she loved much. She was proceeded in death by a son, both parents and beloved brother, Roland Gibson. She loved to sing songs from the 50’s with the song ‘Kansas City’ being her favorite; her life long friendship with Ruthie Knue; relaxing near the waters at Geist Reservoir and taking care of any dog or cat. She deeply loved animals and took in strays easily. A well known saying was “by the Grace of God” and she looked forward to being reunited in Heaven with her earthly family and her Savior Jesus. Ginny’s family extends a special thank you to the caregivers at Carmel Health Center for their care and friendships to Ginny.