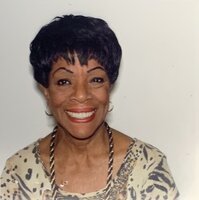 Yvonne Delores Thomas Cooper, 81, affectionately known as “Alexis, The Grand Dame & Aunt Von” departed this life on September 1, 2021 in Indianapolis, IN. Yvonne was the first born out of nine siblings on November 28, 1939 to Julius and Roberta Thomas. She graduated from Cordia King Modeling School where she received numerous awards and trophies for her charm and grace in the industry. After graduation from Crispus Attucks High School, she began her professional career working for Attorney Buddy Mann and Doctors E. Clark and John Brown as a paralegal. Yvonne eventually retired at Western Electric after twenty years of service. Yvonne was raised in the Catholic Church but was baptized as an adult and became an active member of Walk in the Light Church. She would end every encounter or phone call with “I Love (Luv) You”. Her favorite saying was “I can be your best friend or your worst nightmare”. She would often say “If it weren’t for me none of the rest of you would be here”. Yvonne was small in stature but had a larger than life presence impacting everyone she met. Her laugh and smile were infectious. Yvonne was first united in marriage to Claude E Douglas (deceased). They had two children LaTanya “Tinshe” Douglas (deceased) and Claude “Butchie” Douglas, Jr. A fateful visit with family friends (The Bolden’s) and favorite Aunt(Clara) lead to Yvonne meeting her love match and soulmate Tommy Cooper (deceased). Yvonne and Tommy were married four decades and built a life together with their six children. Tommy’s military service in the Airforce allowed them to live on both the east (Montauk) and west (San Francisco) coasts. As a military spouse, Yvonne excelled in academics as well as socially. She graduated from Sonoma State University with an associate’s degree and served in leadership roles within the military spouse’s association. After Tommy’s military retirement they moved back to Indiana to be closer to their families. Yvonne loved celebrating the holidays with family and friends. Her legacy lives on through the numerous nieces and nephews that she personally named and special couples that she played matchmaker. Yvonne was so proud of her grandchildren Anwar, Eric Jr., Shakira and Shakayla. She is survived by her children Butchie, Chan, Eric (Diana), Keith, Simona, her mother Roberta Thomas and son in law James (JJ) Parker siblings Rebecca (John) Gipson, Sheila (Michael) White, Larry Thomas, Sandra (Ronald) Fields, Beverly Asher, Deborah Tinsley, Donna (Daryl) Lanier, Special daughter Roslind Lewis and a host of nieces and nephews. Proceeded in death by Julius Thomas (father), Tommy Cooper (Husband) and LaTanya Douglas Parker (daughter).