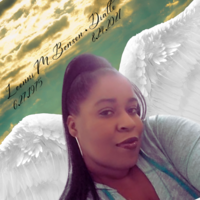 Leonni Marie Benson was born Friday, June 27, 1975 to GySgt. Edward L. Benson Sr & Hillary Benson, at the Naval Hospital in Naples, Italy. Once the family relocated to Oceanside, California, Leonni attended San Rafael Elementary School, Oceanside High and Ocean Shores High Schools; where she developed her love for Music and displayed her singing talents by performing in talent shows and school plays. Leonni obtained her GED and also attended Midwest Career Correspondence College for Medical Assistance. She was currently going through the process to attend Ivy Tech next Spring as part of their Healthcare Specialist program. Leonni lived out the rest of her life, as a homemaker, where she cared for her 12 year old daughter Aariquah, who is on the spectrum and requires exclusive attention. Leonni was full of love and light. Always offering words of encouragement, but in her fashion. She was always straight forward but knew when to be gentle at the right times. Her smile could light up a room, her voice could fill it. One of the most genuine people you could know. Leonni was preceded in death by her Grandmothers, Illeanna Emma Johnson & Flossie Mae Fletcher, as well as her sister Erika Denise Batie. Leonni leaves to cherish her memory, her parents; Mr, Edward Sr. and Mrs. Hillary Benson, brother; Edward L. Benson Jr., Sons; Marquis E. Benson & Zacquary A. Benson, Daughters; Sequoia Illeana Nuckols, Aariquah Kirby, Olivia-Leonni & Brooklyn Gurevitz (Florida), Daughter in Law; Shaquita Benson, and Grandchildren; Zacquary A. Benson Jr, Zaviyhanna A. Benson, Zariah A. Benson,Theodore & Theodoria Davis, Aubrianna Nelson and Elijah Horne., and a host of Aunts, Uncles, and Cousins.