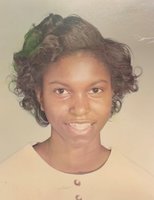 Barbara Ann Godby, 67. She was born in Jackson, Tennessee on May 6, 1954, as Patricia Ann Brown. She was the daughter of the late Willie D. Brown and Irene Canady (Albert). Barbara and her family later moved from Tennessee to Indianapolis, Indiana after her graduation from high school. Barbara departed life on July 11, 2021. Barbara is preceded in death by her father Willie D. Brown and mother Irene Canady, brother Michael A. Brown and her stepfather Albert Canady. Barbara leaves to cherish her memory her son Charles Edward Soules (Shantane’), sister Charlotte Brown, and brother Ricky Brown, along with a host of loving nieces, nephews in addition to other relatives and friends.