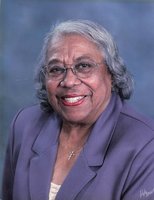 Mrs. Jimmie Lucille Luton (Memaw) was born on June 21, 1917, in Hopkinsville, Kentucky to George Bernard and Ivory Pearl Caldwell. She was an only child. The family moved to Indianapolis, Indiana. Young Jimmie accepted Jesus as her Lord and Savior and was baptized at 17 years of age at Emmanuel Baptist Church. The family moved membership to 16th Street Baptist church in 1938 which eventually became Oasis of Hope Baptist Church. Jimmie Luton Loved the Lord and she loved her church. She was one of two living original charter members until her death. After graduating from Crispus Attucks High school in 1936, Jimmie eventually married. From that union came her only child, Pearl Jean. Pearl was the apple of Jimmie’s eye. She loved, sacrificed for, and spoiled Pearl at every opportunity. Jimmie’s first grandson, Timmy, could not pronounce the name “grandma”. His word for grandma sounded like “Memaw”. Memaw eventually decided that “Memaw” is what she would be called. Memaw was an entrepreneur owner her own beauty salon on 16th street in the early 1960’s called “Jimmie’s Lapetite”. Almost everyone on the east side of Indianapolis was a customer. Memaw was known to donate her services at no charge to anyone who wanted and needed them but could not pay. While running a successful business and raising Pearl Jean, and eventually Pearl’s two sons Timmy and Jimmy Carter, Memaw also cared for her mother until her passing at age 94. Memaw never complained or got tired of helping her family whom she dearly loved. Memaw’s family included those who were not always related by blood. Memaw offered herself unselfishly to all she came across throughout her lifetime. Memaw was a songbird and was known all around Indiana for her beautiful alto voice. She was a consistent and dutiful member of the Voices of Oasis Choir; she performed with the Gospel Symphony Choir, and “The Sounds of Music” appearing throughout Indiana and surrounding cities and states. Memaw was a poetess creating a beautiful book of poetry entitled “His Mercy is Everlasting”. Memaw’s quick wit, charm and winning smile was noticed by the Artistic Talent Agency. They frequently placed Memaw in TV commercials, on billboards, and in newspaper ads to represent their clients. The Harrison Center of Indianapolis included Memaw as one of the “Greatriarchs of Monon16”. Memaw’s image was displayed in the 2020 Positive Images of Indy Calendar as well as in the Indianapolis City Market. Memaw went home to be with The Lord on May 26, 2021 at the age of 103 years, just a month shy of her 104th birthday. Memaw is survived by her daughter Pearl Jean Carter, Grandsons Timothy Carter, Sr. (Stacie) and James Carter. Great Granddaughters Ashanti Carter, Tracia Carter and Tyeasha Parker; Great grandsons Michael Ellis, Timothy Lee Carter, Jr., Tyrell Carter, Deon Parker, Robert Anderson and Gregory Anderson; Nieces Mattie “Tina” Kates and Navonda Adams; a host of cousins, God daughters and loving friends too numerous to list.