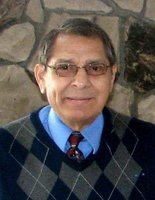 “The Great”, Edward Leo Toscano, 71, of Anderson, IN passed away on November 14, 2020 after an extended illness. Edward was born on October 20, 1949 in San Mateo, CA to his parents Jose Ysabel Toscano and Concepción Hernandez Toscano, both preceding him in death. In Edward’s younger days, he was a roofing contractor and a tree commissioner for the Parks and Recreation Department in Anderson also serving for the US Forest Service in California. He was a former member of St. Ambrose Catholic Church in Anderson, IN and was a lover of nature and the outdoors. Annually, he coordinated all event planning for the Arbor Day festival in Anderson, IN. Eddie loved planting trees, painting, the arts, antiques and gardening. However, his true passion was always Music. Anyone who talked with Eddie knew he was well versed on musical legends from Willie Nelson, John Prine, Janis Joplin to Luciano Pavarotti, Nina Simone and Edith Piaf. Edward was eclectic in his taste and love for music, but his all-time favorite was the great Bob Dylan. A rolling Stone himself, Eddie was always down for a good time, a good football game, great food with family, good friends like Kristie Collins who proved to be a true friend until the end. Eddie was always up and, on the move, even when his body was giving out and turning on him. Eddies had an infectious sense of humor and was a jokester who was able to make you laugh. He was loved by so many and will be greatly missed. Edward is preceded in death by his parents; brothers, Hector Jesse Toscano and William Toscano; sisters Esther Chacon and Bertha Gamez; and nephew, Tony Toscano. Edward is survived by his daughters, Monean Toscano of Indianapolis and Briana (Ryan) Sciba of Greenwood; his loving ex-wife Kathryn Butcher and a true friend, Kristi Collins; grandchildren, Gabriel Toscano, Liliana Conard and Frank Conard; sisters, Elvira Rios, Beatrice Contreras, Betty Sandin and Belia Rennels; brothers, Rene Toscano, Arthur Toscano and Carlos Gamez; several nieces and nephews. Memorial contributions in honor of The Great Edward Leo Toscano can be made to Andersen Parks and Recreation 1611 Chase St, Anderson, IN 46016.